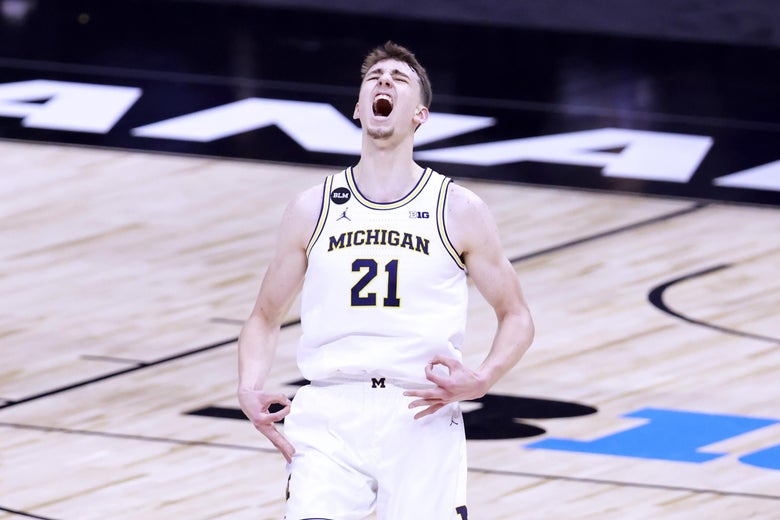 Every American college that has a big sports culture is either a football school or a something-else school. While a few might identify most closely with lacrosse, baseball, hockey, or volleyball, the most common alternative to football schools are basketball schools.

A school’s sports orientation does not depend on which program brings in the most money; if a school has a football team, its athletic cash cow is … probably football. Rather, a football school is one where a fan base’s emotional energy is tied to football. At a basketball school, the collective mood rises and falls on the hardwood.

Usually, a university’s connection to football or basketball has a simple origin and explanation. One team generates an emotional connection with a fan base by being good and bringing joy for some period of time, while the school’s other programs remain mostly mediocre or bad, bringing indifference if not woe. But occasionally, a university falls into a perplexing territory that complicates the football school–basketball school dichotomy.

Let us call it the Michigan Zone. It’s a time and place when a school’s other sport becomes much better and much more fun than its primary sport, messing with the sports fan psyche in a way no other kind of fandom does

Michigan started playing football in 1879 and has laid claim to 11 national titles since, at least five of which are legit. Alums include the greatest football player of his era (Tom Brady), a U.S. president (Gerald Ford), and most importantly, the last guy to be on the cover of an NCAA Football video game (Denard Robinson).

But the football team has recently fallen on hard times, losing eight games in a row (and 15 of 16) to its blood rival Ohio State. Since the Big Ten realigned in 2014, Michigan has as many division titles (zero) as Rutgers and Maryland. The Wolverines are another mediocre season or two away from doing what was once unthinkable: splitting with former QB, longtime program golden boy, and current coach Jim Harbaugh.

On the opposite pole sits the Michigan men’s basketball team, which won a national title in 1989, recruited the Fab Five in 1991, and then saw its program crater when the NCAA got suspicious about how the team lured so many great players to Ann Arbor.

The resulting sanctions kicked off two-ish decades of irrelevance, and Michigan didn’t get consistently good again until the 2010s. The hoops team has its own recent string of heartbreaking losses (two in the national title game plus one in the Elite Eight to a great Kentucky team), but it has nonetheless become a consistent winner under two coaches, John Beilein and Fab Five member Juwan Howard.

Given Michigan basketball’s recent penchant for coming close and failing to win it all, this March Madness should be at once exciting and stressful. But Michigan fans do not seem, on the whole, all that worried about it. At the least, they seem way less stressed than they do when it’s time for the football team to play Ohio State.

“There are Michigan football losses from, like, 18 years ago that I still think very vividly about all the time.”

“Michigan basketball has never hurt me as much as Michigan football has.” explains Jane Coaston, the New York Times podcast host and opinion contributor who is also a Michigan alum and diehard fan. “Even if you show me Ohio State having a buzzer-beater against Michigan in the Big Ten tournament, it just doesn’t hurt as much emotionally.”

The Michigan fans I know are different people depending on the time of year. During football season, they are beaten-down workers coming home from a long shift at the factory. They seem exhausted, and their consumption of sports is akin to drinking grain alcohol out of a firehose. During men’s basketball season, they are sitting on Adirondack chairs overlooking a lake, drinking perfectly mixed cocktails, with their top shirt buttons undone and not a care in the world.

How Michigan fans react over the next few weeks will be a great case study for anyone trying to understand how college sports fans use their teams as (on one hand) investment vehicles for hopes and dreams and (on the other) a means to protect themselves emotionally when their chosen sports don’t provide the fulfillment they crave.

The starkest inverse situation in college sports may be the one playing out now at Indiana. The Hoosiers have been stuck on a basketball hamster wheel for decades, trying fruitlessly to recapture the glory Bob Knight’s teams brought in the 1970s, ’80s, and ’90s. Indiana hasn’t made the NCAA Tournament in five years, and Hoosiers fans were so sick of their last coach, Archie Miller, that two rich donors just ponied up $10.4 million to fund a buyout and set up IU to hire a replacement.

When Knight was prowling the sidelines at Assembly Hall (and at most other times), Indiana football was abysmal. But in the past few years, coach Tom Allen has made that program pretty good—so good that the Hoosiers finished second in the Big Ten East in 2020 and were the only conference opponent to put a serious scare into Ohio State. IU football fans are akin to Michigan basketball fans, in that they stress little about losses but are on a joyride when their team is better than expected. Fans have recently rallied behind #9WINDIANA, a battle cry for the team to go 9–3. That record would be an utter delight for Hoosiers fans, while the same mark at Michigan, repeated too many times, could get Harbaugh fired.

“Indiana basketball is a laboring exercise,” says my former SB Nation colleague Kyle Robbins, the #9WINDIANA originator. “There are 300 people that want to opine about an Indiana basketball game on any particular night after the game. There is Twitter. There are all these outlets that cover it. There are all these narratives. There’s all this bullshit, basically. Indiana football is house money.”

Michigan is the opposite: The basketball team is fun, and the football team is everything. That relationship is typically cemented the first time a fan walks into Michigan Stadium, takes a few steps forward, and looks down into the giant bowl that’s carved into the ground.

Coaston got hooked on the Wolverines at their 2005 win over undefeated Penn State, when Mario Manningham caught a walk-off touchdown as time expired. “The highs would be some of the best moments I’ve ever had,” she says.

Conversely, the lows are terrifying and magnified by the season’s short schedule. “You’re watching every game with an eye on how it is going to matter for the Ohio State game,” says Ace Anbender, the managing editor of MGoBlog, the venerable Michigan blog and message board. “Especially of late, that mostly means watching with a great deal of trepidation, because even inconsequential mistakes in blowout wins over bad teams carry this implication of, ‘You can’t do that against Ohio State.’ ”

The most crushing recent loss to the Buckeyes came in 2016, when Michigan came inches away from stopping Ohio State on fourth down to lock up an overtime win. “The emotions I had had about Trump winning in 2016—I was like, ‘I’m fine, I know I can handle this,’ ” Coaston says. “ ‘For the work I do, this is a really important moment, but I’m ready for it.’ I had put all of those emotions into a box, and then I’d shoved that box into Michigan football, and then the Michigan–Ohio State game happened in 2016, and I was like, ‘Ohhhh, no. The box exploded.’ There is no emotional safe space for pretty much anything.”

“I don’t think I ever have thought about a Michigan basketball loss more than like a half-hour after it ended,” Slate’s Ben Mathis-Lilley, a fan since he was a kid in the ’90s, says, “whereas there are Michigan football losses from, like, 18 years ago that I still think very vividly about all the time.”

Whatever success the Michigan hoops team does have is not quite a salvation, because that implies it makes football’s failures OK, which it very much does not. But here is where the Michigan Zone can pay off for fans—and where a kernel of truth lies about sports fandom: If you’re obsessed with a team, it’s inevitably going to get unhealthy. But if another team can be a self-care mechanism—designed to make sure you don’t come to despise sports altogether—you may be able to approach enlightenment. That’s what Michigan basketball has become in Ann Arbor, just as football has filled the role in Bloomington.

However, such a mental transformation has to happen naturally. You can’t pick and choose which sports experiences mean the most to you. They just do. Once a school’s culture has been established and passed on for generations, it can’t just be discarded for something different. If one team isn’t giving you what you need, you can’t replace it on the fly, even with something else that you care about a lot.

For hundreds of thousands of Michigan alums and millions of fans, then, this March Madness will function like a spring break. A championship would be wonderful. But a loss will not be fatal. This century of Michigan football has already proved that Michigan fans cannot die.

Listen to an episode of Slate’s sports podcast Hang Up and Listen below, or subscribe to the show on Apple Podcasts, Overcast, Spotify, Stitcher, Google Play, or wherever you get your podcasts.

Utah basketball fires Larry Krystkowiak. Who could replace him?