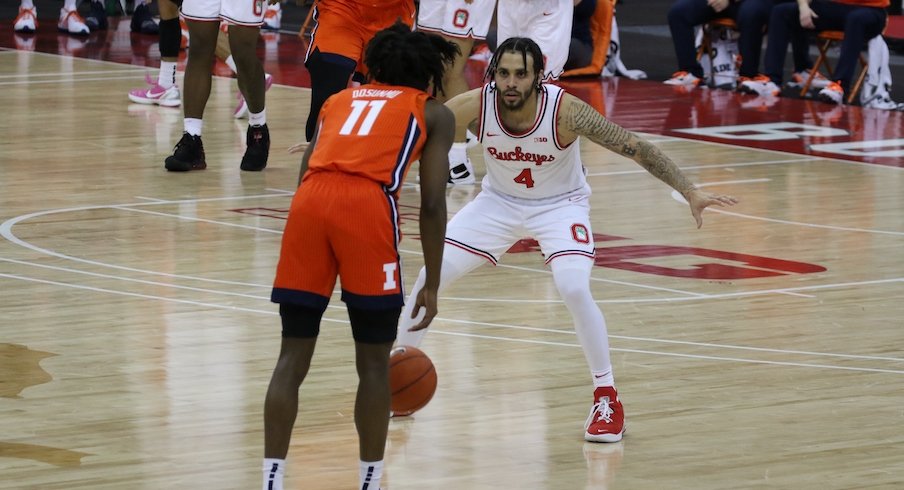 Eight days ago, Duane Washington Jr. couldn’t hold back the emotion written across his body. Pacing along the baseline, he listened to CJ Walker and Kyle Young deliver their Senior Day remarks to the friends and families of Ohio State players and coaches strewn across the Schottenstein Center stands. He heard them say, almost pleadingly, that they wanted to get things turned around. Walker spoke to them directly, telling them they were going to “try to figure this out.”

It was, for all intents and purposes, the low point of the Buckeyes’ 2020-21 season.

Two weeks before, Ohio State had entered a mid-February weekend winning 10 of 11 games and rising to No. 4 in the polls. By the time an emotionally torn-up Washington heard his seniors speak, his team was 0-4 in its last four games and beginning to torpedo in the eyes of the public. It had begun to develop a nasty habit of failing to close out games, having just lost, 73-68, to Illinois in a game it led until it went scoreless in the final three and a half minutes. While head coach Chris Holtmann preached patience and process, those outside the locker room wondered if the Buckeyes could turn it around.

The past several days gave everybody the answer.

Ohio State beat Minnesota in the second round of the Big Ten tournament, defeated Purdue in the quarterfinals, then handed Michigan a loss in the semifinals. Now, it finds itself right back where it was just over a week ago: Getting prepared for a game against Illinois.

Except this isn’t just any game. What will tip off at 3:30 p.m. Sunday in Lucas Oil Stadium will be for the Big Ten tournament championship.

Holtmann’s Ohio State team, having executed a remarkable response to a four-game slide, will meet Brad Underwood’s Illini for the third time this season. If the fifth-seeded Buckeyes can pull off a second straight upset of a projected No. 1 seed in the NCAA tournament, they’d secure their first conference tournament title since 2013.

“It’s unbelievable,” Holtmann said after beating Michigan. “I’ve told you guys dating back to the summer, I didn’t know what this group could be. Our story’s still being written. But what I did feel is incredibly good about this group. I feel incredibly good about our young guys, our old guys. I feel incredibly good about our culture, and that’s a credit to our guys. It’s exciting. Listen, every game here has been a challenge. We certainly could have lost all three of them. But we also probably dropped one or two that we could have won. Give ours guys credit. It’s a phenomenal experience. I’m glad they’re enjoying it.”

They’ll enjoy it a heck of a lot more if they can finish the job on Sunday.

Star Guards And The Others In Backcourt

The last time these two teams faced off, Duane Washington Jr. and Ayo Dosunmu put up fairly similar stat lines – both scoring between 15 and 19 points with between three and six assists and a few rebounds – yet the All-American Illini guard got the better of the matchup in the final moments. With a black protective mask and all, he scored Illinois’ final five points, including an and-one layup with 44 seconds left that broke a 68-68 tie. Washington, meanwhile, missed all five shots he attempted in the last three minutes.

The junior Buckeye can get redemption on Sunday.

Washington’s coming off a 24-point afternoon where he torched Michigan and propelled his team into the title game. Whatever momentum he has he’ll try to bring with him into the final 40-minute contest of the conference tournament. He recorded 11 points on 3-of-10 shooting in the first game versus the Illini and 15 points on 18 shots in the second matchup. So, he’ll need to be more efficient to go mano-a-mano with Dosunmu, a National Player of the year candidate averaging 21 points, 6.2 rebounds and 5.3 assists per game.

Outside of those two, both teams have a couple others in the backcourt who could swing this one.

Ohio State relies to CJ Walker (9.2 points, 4.4 assists) as a true point guard who’ll have the ball in his hands during certain key moments. He fumbled it away late in Saturday’s semifinal, which he can’t afford to do on Sunday, but as Holtmann has noted, he often acts as an extra coach on the floor and brings a dimension of speed to this team that it needs. Long-range sniper Justin Ahrens will see some action, and so too could defensive stopper Musa Jallow.

Illinois has gotten a boost from freshman Andre Curbelo – Zed Key’s high-school teammate – who continues to round into form late in the season. The crafty Puerto Rican has scored in double figures in six of the past seven games and figures to be a challenge, especially since he dropped a career-high 19 on the Buckeyes eight days ago. Senior Trent Frazier and freshman Adam Miller can pack some scoring punch too, though their contributions have been more inconsistent from game to game.

RELATED “He Cares About That”: Beating Michigan No Small Thing For Duane Washington Jr.

Kofi And The Glass

Kofi Cockburn possesses the kind of you-need-to-see-it-to-believe-it size that makes Holtmann’s jaw drop. He has said he hasn’t faced anybody quite so physically imposing, and for understandable reasons. Cockburn stands 7-feet tall, weighs 285 pounds and is an absolute force. He managed 26 points and eight boards in Saturday’s matchup with Luka Garza, Dosunmu’s main competition for National Player of the Year. For the season, Cockburn’s at 17.3 points and 9.7 rebounds per game, and he’s the main reason why Illinois leads Big Ten play in 2-point field-goal percentage and defensive rebounding rate.

For the third time, Ohio State will try to rein him in. Without Kyle Young available due to a concussion, it’ll largely be a two-man job with E.J. Liddell and Zed Key taking the brunt of the minutes in the post.

Cockburn rarely passes. In fact, he incredibly has four assists all season. So, it’ll be pertinent for Ohio State to avoid him catching the ball deep in the past as much as possible, and whenever he does catch it down low, he’ll see a swarm of Buckeyes.

Illinois is a top-three team both on the offensive glass and in preventing opponents from grabbing offensive boards, too. Thus, crashing the boards will be a priority for Liddell, Key, Justice Sueing and others.

Another Big One From E.J.?

Liddell, for the third time this season, will try to take on what should be advantageous individual matchups with Cockburn and Giorgi Bezhanishvili. There’d be nothing sweeter for him than to win a Big Ten championship while simultaneously beating Illinois.

Prediction: Illinois 80, Ohio State 77 (What, did you really want me to start picking the Buckeyes to win all of a sudden?)

‘I once beat Nadal at Roland Garros but…’