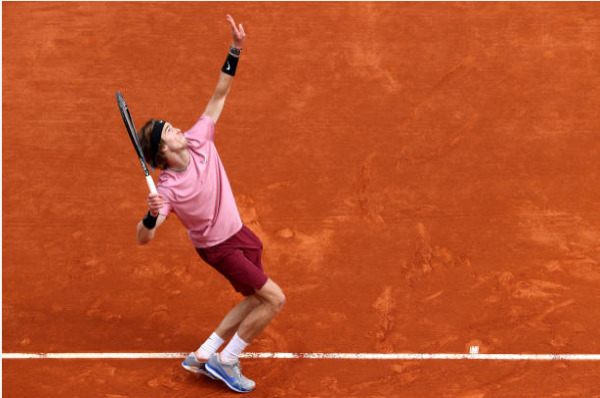 The final is here! It’s been an incredible week of tennis at the ATP Monte Carlo Masters and there are just two men left in contention. The pair look to be evenly matched and it should make for an excellent final in Monaco. But which man will win his first Masters 1000 title and who will fall one match short?

Andrey Rublev is having a dream week in Monaco. The Russian beat 11-time champion Rafael Nadal in the quarterfinals and took out Casper Ruud in the semifinals, winning 6-3 7-5. In that match, Ruud, who had been in excellent form, only won 50% of the points behind his serve, whereas Rublev won 61% of his service points won. In addition, Rublev did a superb job forcing Ruud into his backhand corner and keeping the Norwegian from bringing his lethal forehand into play.

Stefanos Tsitsipas has eased into the ATP Monte Carlo Masters final without dropping a set. In the semifinals against Dan Evans, Tsitsipas won easily 6-2 6-1. Tsitsipas won 79% of the points in which he made a first serve, while restricting Evans to winning just half of the points behind his first serve. The Greek had even more joy against the Briton’s second delivery, winning the point 67% of the time when returning second serves. It was total domination.

Rublev leads the head to head 4-2 (ignoring the Next Gen Finals and the Abu Dhabi warm-up event which are both effectively exhibitions). On clay, the head-to-head is tied 1-1, with both meetings happening last season.

This match will likely be decided by whether Tsitsipas can take advantage of the Rublev second serve (returning is not always a strength of the Greek’s) and who can get the first strike in and control the baseline which both players have been doing very well. Interestingly enough, in their last matchup, Rublev won a higher percentage of both first and second serve points and was not broken.

Ultimately, it’s hard not to go with Rublev here as a result. He’s dominating from the baseline and, after struggling in Miami where he had what looked like a fairly open path to his first Masters 1000 title, will be ready for this moment. Rublev comfortably beating Ruud after such a big win over Nadal was almost as impressive as the win over Nadal itself.

Rublev will likely target the Tsitsipas backhand and force him to play more defensive tennis, which is outside of his comfort zone. While Tsitsipas is going to have his moments where he is pushing Rublev around and he can finish points off effectively at the net, expect Rublev’s baseline game to get the better of Tsitsipas over the course of the match.