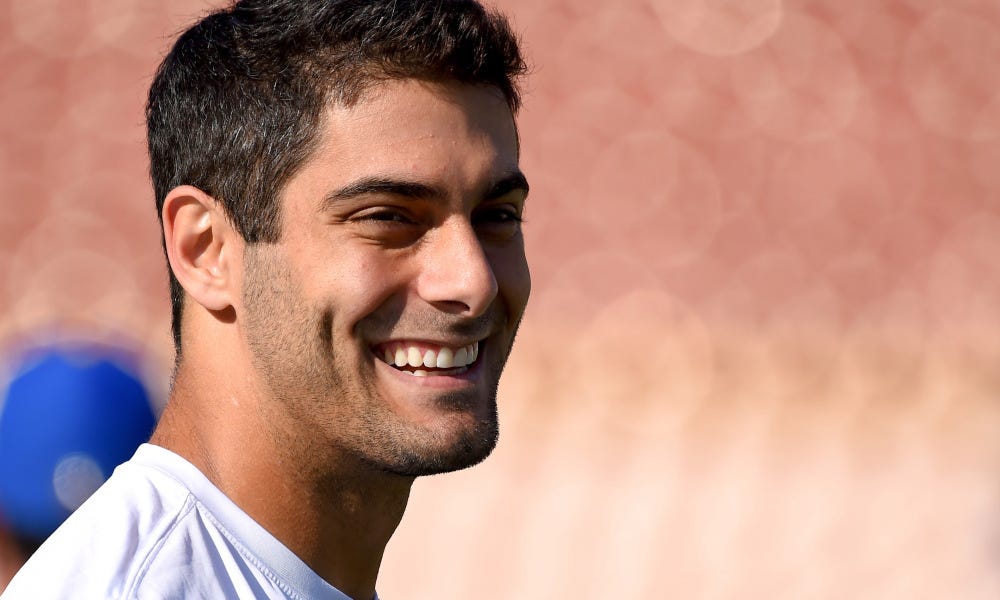 All roads should lead to Jimmy Garoppolo

Early in the second half of the long and frustrating 2020 Patriots season it was clear that the time to look forward to 2021 was upon us. Looking ahead, I started writing about the teams’ needs, strengths, weaknesses and how I saw the approach to the immediate rebuild for the off-season. Given the many gaps in talent all over the field a logical choice to steady the ship would be to make an effort to bring back the once chosen second son, Jimmy Garoppolo.

Following San Francisco’s Friday trade with Miami to move into the third pick in next month’s NFL Draft, the path to reacquiring Garoppolo is blazed and the target is now clearly in sight.

When you look at all the moves made to date for the Patriots along with the way San Francisco is set up, all roads do in fact lead to the return of Garoppolo to the Pats. The evidence is there to make a strong, be it circumstantial case so let’s break it down.

THE APPROACH TO FREE AGENCY

Once Belichick went all in to finally restock and reenergize both the tight end and wide receiver positions by acquiring Jonnu Smith, Hunter Henry, Nelson Agholor and Kendrick Bourne, the vision of a Garoppolo return became crystal clear. Think about it.

Then, the much maligned Cam Newton was resigned to the chagrin of Pats fans all over New England. When details of his back up level contract were revealed however and as free agency began with a bang for the Pats, that bewilderment tempered a bit. Just a bit.

Fair or unfair, Jimmy G. has the sticky label of being injury prone, nursing three injuries already during his time in San Francisco. Newton, though deeply challenged at throwing the football these days did prove to be durable and has played through pain and with injury throughout his career in Carolina. If an injury risk like Garoppolo is the target, then fortifying those who will be charged to protect him (resigning Brown, David Andrews and Ted Karras), while having a durable (if not much else) backup in Newton makes perfect sense. Protection and security boxes checked.

Breaking down the receivers and pass catchers:

The moment the signings of Agholor and Bourne were announced on the ‘Mut at Night Show’ on evening one of free agency, Jimmy G instantly popped into my mind. Agholor is a deep threat, Garoppolo throws a sweet deep ball, always has. Newton cannot. Coming from the 49ers, Kendrick Bourne is a familiar target for Garoppolo and is an ideal fit in the Patriots wide receiver scheme; one that puts maximum value on a receiver’s ability to get open quickly. Bourne can do that. Bourne does that and Garoppolo has experienced it.

BACK TO PROTECTING YOUR ASSET

Tight ends and running backs have proven to be desirable security blankets for quarterbacks under duress and pressure. The Patriots have mastered the ability to leverage that in their offensive scheme. Jimmy G may have proven to be a bit fragile but he’s also shown that he can operate the Pats offense and get rid of the ball quickly with good judgement. At his disposal in New England should the Pats by able to pry him loose are two tight ends in Smith and Henry that will get open, along with maybe the league’s most talented running back at catching the football out of the backfield in James White. He’s at or near the top of the league in that skill and I’m sure would appreciate the chance to not have to jump and pray for Newton’s airmailed screen passes to land.

Easily summarized, the players the Pats specifically targeted and signed this month are tailor made for a Garoppolo led offense.

You need a willing dance partner to trade and prior to Friday the Garoppolo to New England scenario was based on little more than hope and conjecture. Belichick’s approval of the player and the ongoing undercurrent that San Francisco’s Head Coach Kyle Shanahan would like to move off of Jimmy G being the main drivers. There was also the loose theory that Shanahan might owe Belichick one for first acquiring Garoppolo for a measly second round draft pick and if the right scenario presented itself, that a deal could be made. End scene.

San Francisco now owns the third pick in the upcoming NFL Draft and that’s exactly where rookie quarterback gold is being mined. Depending upon whose insight you trust, that player could be Justin Fields, Trey Lance or Mac Jones. Underreported and seemingly forgotten by many is that the 49ers do have a capable backup to steward their offense while the rookie to be named later gets comfortable. Nick Mullens (a restricted free agent) can hold the fort down for San Fran until their coveted rookie is ready. Also, though the pickings are slimming there are also still reasonable free agent backups for them to get like Blaine Gabbert, Alex Smith or even Blake Bortles for training camp and early season competition. Bottom line, the scenario for the 49ers to move Garoppolo is far clearer today than it was Thursday and it’s always been reasonable to discuss.

LASTLY, BACK TO THE PATRIOTS

The Patriots roster including offense, defense and special teams is vastly improved and nearly fully complete. Even with Newton under center in what the popular vote would surely show as the least desirable scenario, the Patriots are markedly improved year over year and should be competitive. On top of that they own 10 picks in this years’ draft and will surely be active as their roster is already brimming over.

There are also more than five quarterbacks with talent in this draft class, so adding Garoppolo does not preclude the Patriots from investing in the future of the position later in the draft. Names to remember include, Kyle Trask-Florida, Ian Book-Notre Dame, Sam Ehlinger-Texas and Kellen Mond-Texas A&M amongst others.

With still nearly $12 million in cap space and plenty of roster moves to make, the Garoppolo to New England scenario is clearly in focus. Both dance partners now have a path to get the deal done and all the evidence you need has been presented.

I rest my case.