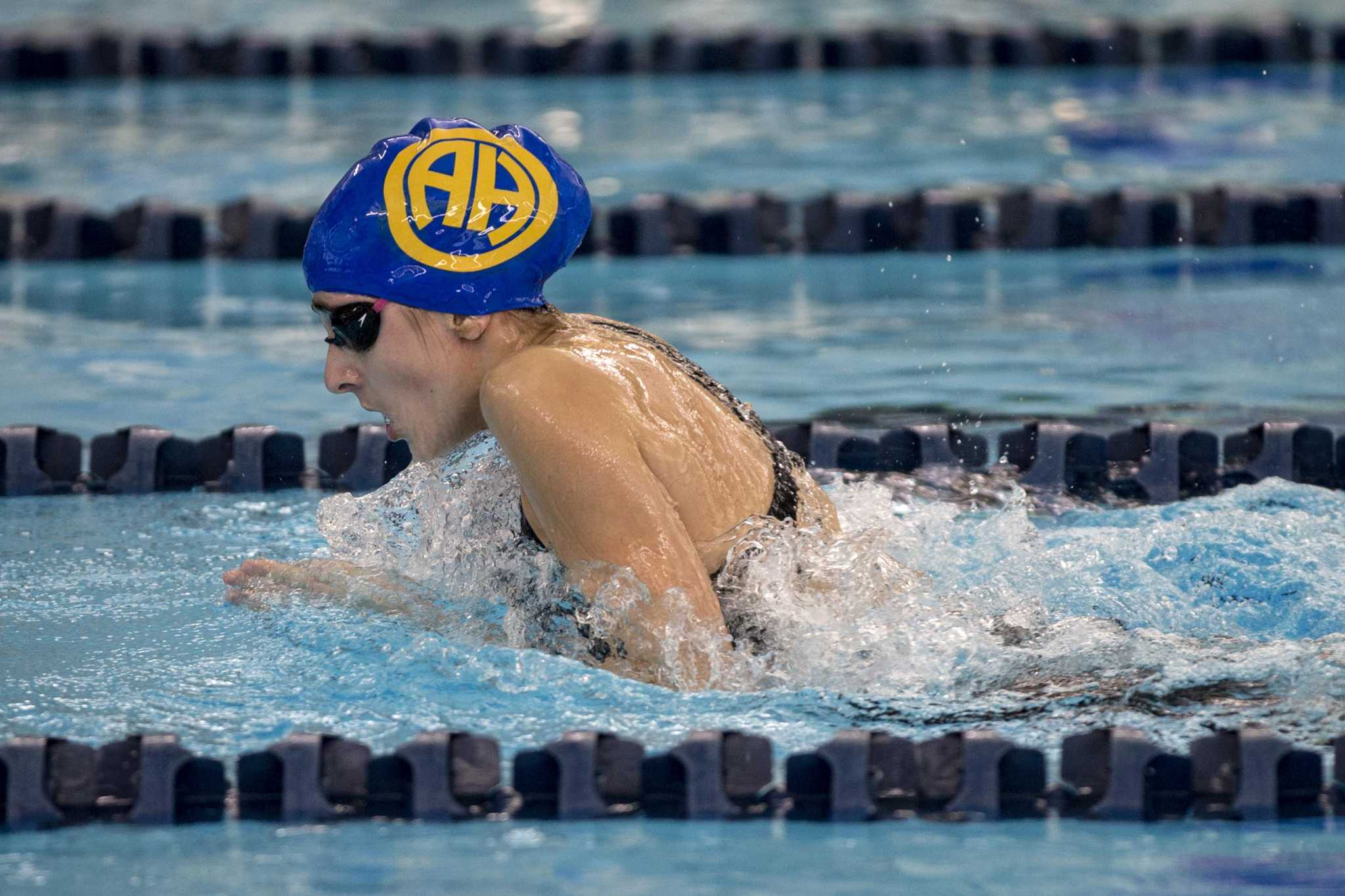 The Mules, who finished third at last year’s Regional, chalked up 379 points while winning five events. Austin’s Liberal Arts and Science Academy (Lasa) was runner-up with 279, while Austin Anderson placed third at 213.

New Braunfels Canyon tied for fifth with Austin McCallum (151 points), while Canyon Lake was 10th with 78 points. Canyon Lake’s Kim Moses was elected Coach of the Meet by her peers.

“We work hard every day and the girls perform as well as they can,” said Alamo Heights coach Norm Collins, who led his girls team to a 10th-place finish at last year’s state meet in Austin. “Ýou can’t really control the competition. The girls who are in the 400-yard freestyle relay are the top swimmers as far as the whole team, and everyone else feeds off of them. When they started out fast, it made everyone else drop times.”

The team of Sophia Carroll, Lila Foote, Maia Young, and Elizabeth Walsh won the 400 free relay, the last event of the meet, with a time of 3:39.31. The Mules edged Anderson by .37 seconds.

The winners of each of the finals qualified for the UIL 5A Girls Championships, to be held Feb. 20 at Josh Davis Natatorium.

Foote was named Swimmer of the Meet with her two individual wins and two relay victories. She amassed 269 points in the final tally, followed by Ana Herceg of Pflugerville Weiss with 261.

The Alamo Heights sophomore teamed up with Walsh, Carroll, and Liliana Gamiz as the Mules won the opening event of the meet, the 200 medley relay, clocking in at 1:49.51. Foote garnered the gold medal in the 100 butterfly (56.75 seconds) and the 100 backstroke (56.82) before finishing with the 400 free relay.

Foote placed fourth in the 100 backstroke and sixth in the 100 butterfly in in last year’s state championships. She is also now a two-time Regional champion in each event.

“I just gave it my all today, and I’m really happy,” Foote said. “It’s obviously been difficult with COVID, but we really just pushed hard and did what we could given the circumstances. Our team members encourage each other and we work really hard. It’s really motivating.”

During the morning session, Alamo Heights notched its first gold medal as senior Sophia Ursone scored 391.00 points in winning the 1-meter diving competition. Ursone was also named the Diver of the Meet. Skylar Sidensol-Denero of Lasa was runner-up with a score of 229.50.

The UIL Region VII-5A and 6A Boys Championships are scheduled for this weekend at Josh Davis. The 6A boys are set for Friday, with the 5A events slated for Saturday. Preliminaries start at 10 a.m. each day, followed by diving. The swimming finals get under way at 5:30 p.m.