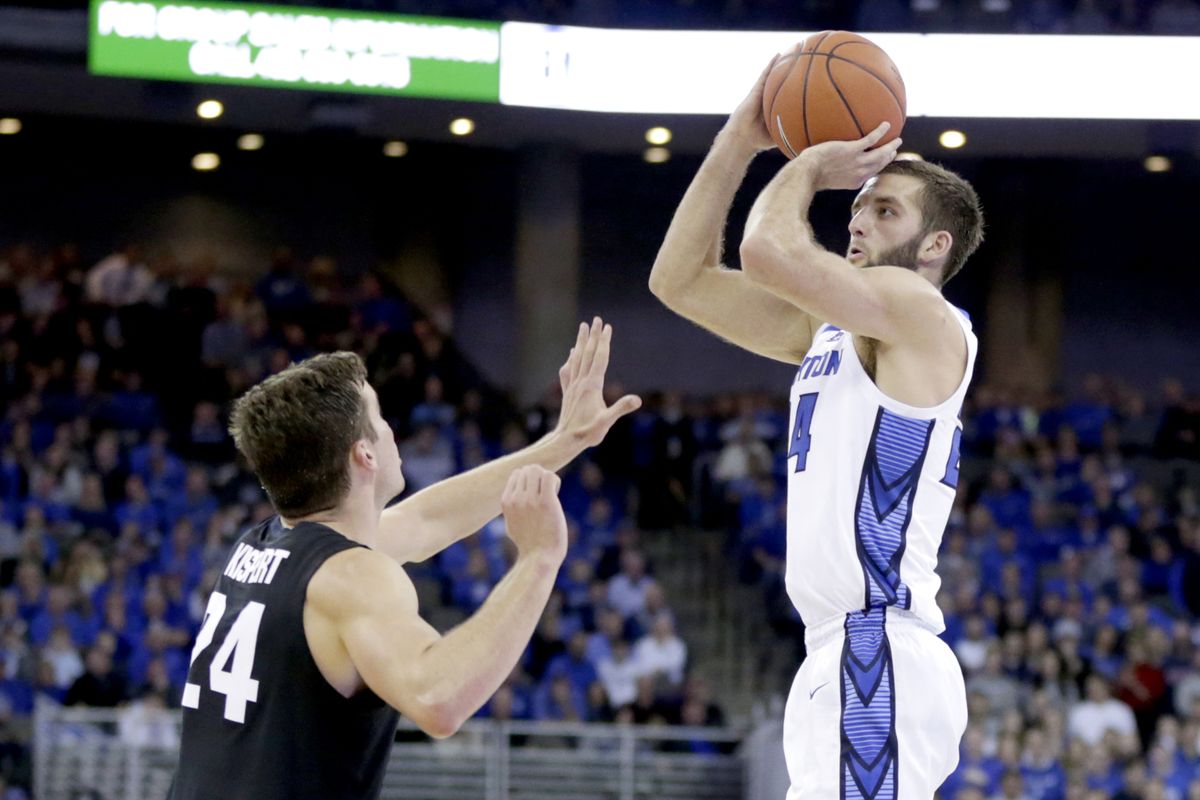 A Grip on Sports: If we are to lose power on this Palm Sunday, let’s hope it happens after the Gonzaga/Creighton game finishes

A GRIP ON SPORTS • We may find out today how big a basketball fan the guy upstairs really is. We’re supposed to have a rather powerful windstorm in the Spokane area this afternoon, powerful enough to knock down power lines. The warnings and watches pinpoint 2 p.m. for a start time. Gonzaga tips at 11:10 a.m. If the storm comes early, or the game goes long, they could overlap. That would not be good.

• With two Catholic universities playing – Gonzaga meets Creighton with an Elite Eight spot at stake – it shouldn’t be too hard to believe the windstorm won’t arrive until the game is long over. But you never know. Martin Luther could have gotten into the Big Guy’s ear. After all, the little-known 96th thesis reportedly had something to do with zone defense.

Religious discussions aside, today’s matchup seems to tilt toward the Western Jesuit university from the smaller-school conference. The Bluejays, who oddly enough play in the Big East despite being located in the middle of America’s heartland, are a good team with noticeable flaws. The Zags? Their 28-0 record, No. 1 national ranking, top seed? It all points to a mismatch. Maybe that’s why they are a nearly two-touchdown favorite.

The wind scheduled to blow through the Inland Northwest this afternoon? It’s a 19.5-point favorite over the pine tree next door.

• We’ll be back this afternoon with our thoughts about the wind emenating from the CBS broadcast, though Ian Eagle, Jim Spanarkel and Jamie Erdahl are more understated than most.

After we send our TV Take, we’ll pull out the candles, line up the flashlights, make sure the garage door is open and hunker down for the afternoon and evening. 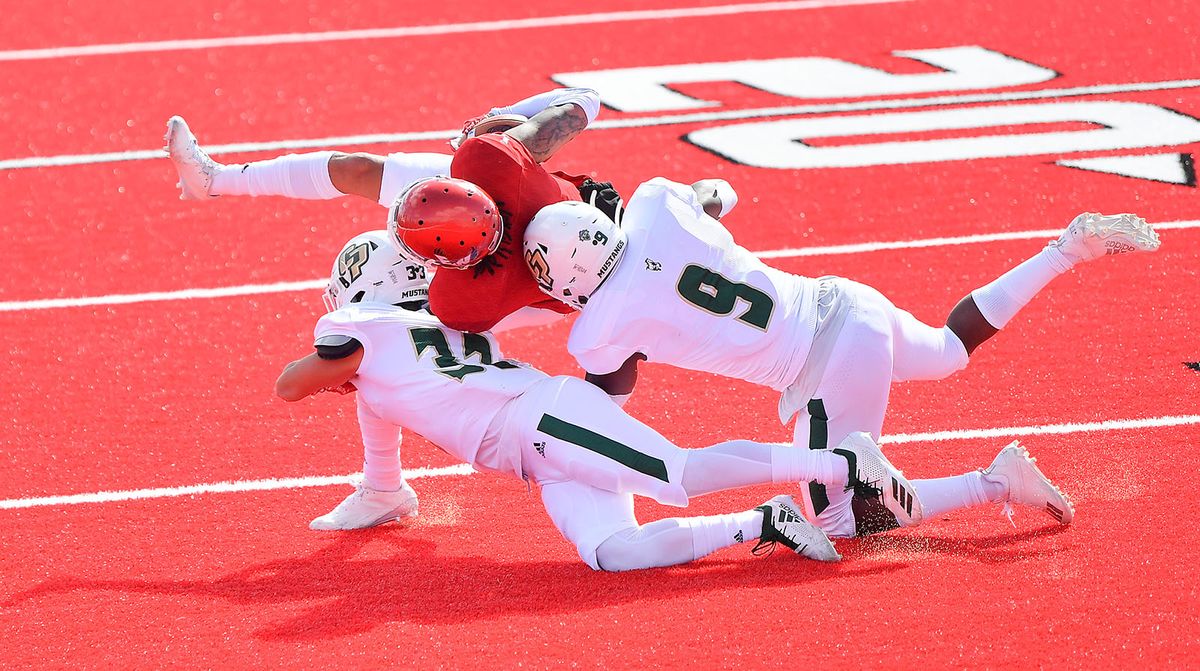 • College football in the spring is doing just fine, thank you. Take yesterday’s four Big Sky Conference games. One was a rout – Eastern just put a licking on Cal Poly in Cheney, making Beau Baldwin’s homecoming about as enjoyable as the dateless one we endured in high school – but the other three came down to final minute.

In Moscow, a backup-to-the-backup led the Vandals to the winning score with 7 seconds remaining. UC Davis scored its game winner over Idaho State a second earlier, avoiding a huge upset and breaking the Bengals their second consecutive last-second loss. All well and good, but nothing tops the escape engineered by third-ranked Weber State.

The Wildcats threw a Hail Mary from 50-yards away as time expired and it was blessed as it came to earth – in the Northern Arizona end zone and in the arms of Weber tight end Justin Malone. In all, 15 seconds were all that was needed to decide three conference games.

• Come to think of it, those three buzzer beaters, so to speak, are three more than we’ve seen in the two weeks of the NCAA Tournament. For all the great upsets, for all the great, unexpected runs (we’re looking at you Wayne Tinkle, as does columnist John Blanchette this morning, among other things), I can’t recall one last-second upsetting shot.

There was nearly one Saturday, but Oral Roberts’ Max Abmas couldn’t get his 3-pointer at the buzzer to fall, allowing Arkansas to escape into the final eight.

Maybe we will be blessed with such an occurrence today. It is Palm Sunday after all. A perfect day for a miracle. 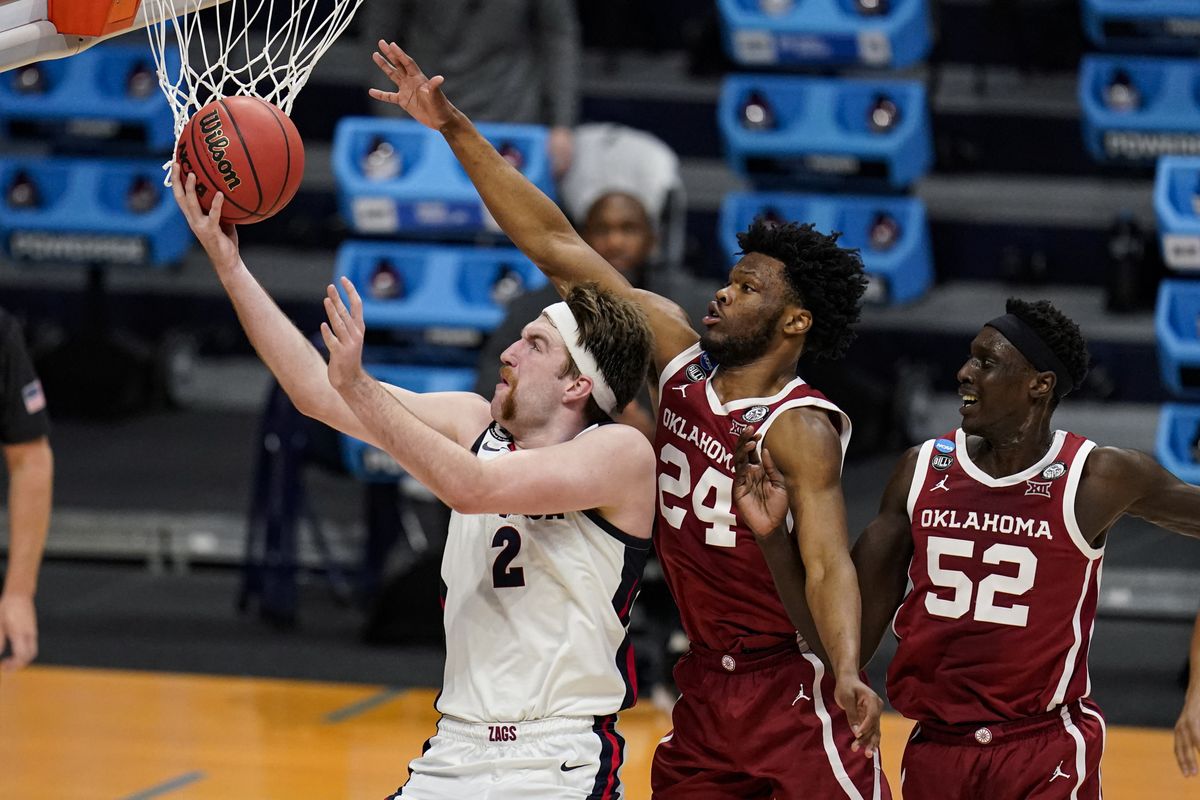 Gonzaga: Speaking of miracles, it will be one if the two teams don’t hit the over in today’s game, even with it at 158.5 points. Both love to score, as Jim Meehan highlights in his preview. … Jim also has the key matchup and a fun story about the Nembhard family’s connections to both schools. … Speaking of fun stories, we recommend this one by Ryan Collingwood. If you have a long memory, you will remember some Gonzaga dads playing back in the day. … Charles Apple has a Further Review on the two teams. … Dan Thompson chimes in with the connections between the GU team and the one at Whitworth. … Theo Lawson reaches into the pro ranks to tell us about a rivalry. … Switching gears, Jim Allen has his recap of the season for the Bulldog women. 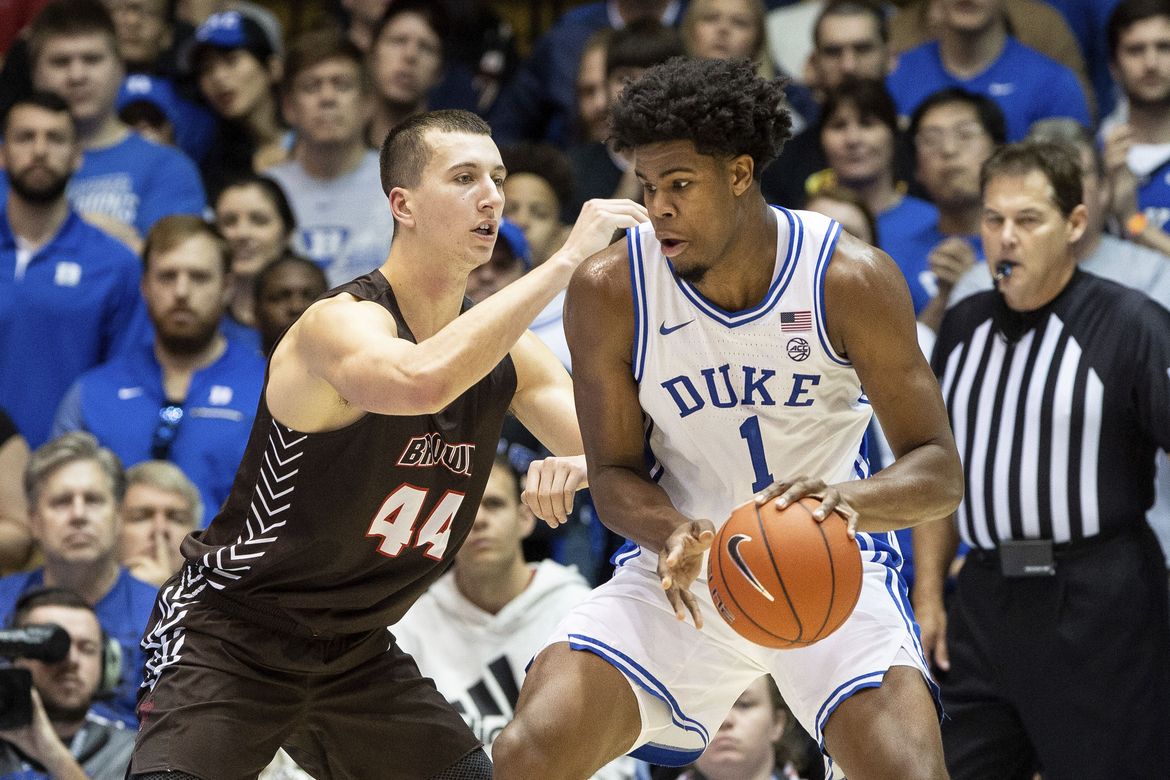 WSU: Kyle Smith and his assistants have been busy in the transfer market already. They attracted an Ivy League veteran as a walk-on. Despite being in Indiana, Theo has that story. … The baseball team lost a tough one to host Arizona State. … Around the Pac-12 and college basketball, the happiest tale of the NCAA tourney has to be that of the Oregon State Beavers. Tinkle’s team knocked off Loyola of Chicago to move into the Elite Eight for the first time in decades. Ethan Thompson has carried them. … USC handled Oregon in their first meeting, a Pac-12 regular-season affair in Los Angeles. Expect tonight’s matchup to be a tight-fought game. The Ducks have been handed some extra motivation and the Trojans may be the hottest team in the tourney. … UCLA will have its hands full this evening. Alabama is not only playing well, it also has a different offensive game plan than most. … Utah went north a bit to get its new coach. Not too far north, though. Craig Smith has been working in Logan the past few years and doing quite well. Whether there will be a lot of players left when he arrives is still to be determined. … Washington will have to restock its roster. Program sales will be through the roof at next season’s early games. … It was an emotionally draining season everywhere, including Colorado. … In the women’s tournament, also in its Sweet Sixteen, Arizona just walloped Texas A&M and moved into the Elite Eight for the first time. … Oregon looks to continue its upset run against Louisville. … Stanford has a matchup with Missouri State. … In football news, spring practice is about to start for Colorado. … It’s already in motion at Arizona, with new coaches all over the place. 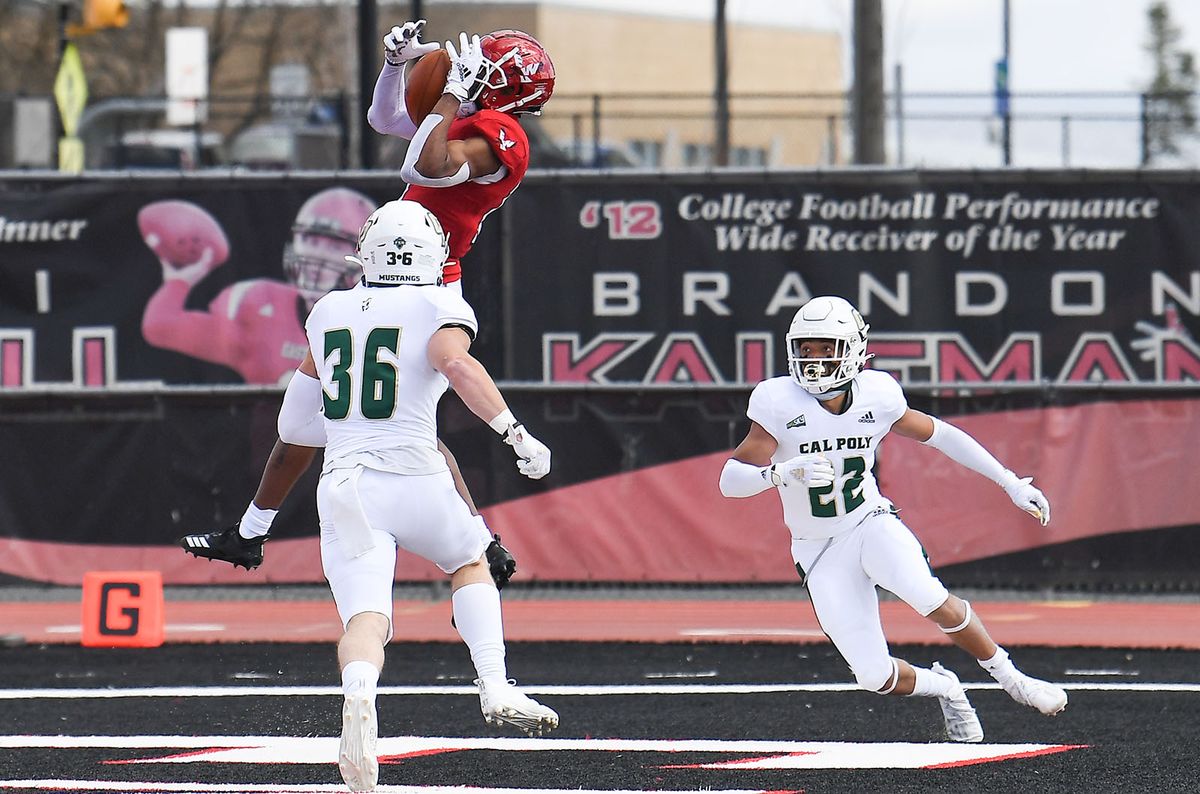 EWU: The rout in Cheney was memorable in its completeness. And who had the coverage for the S-R. With Ryan in Indiana, Dan Thompson filled in and has this game story. … Tyler Tjomsland was there as well and he has the photo gallery.

Idaho: Peter Harriman has the coverage of the Vandals’ last-second victory.

Chiefs: Spokane traveled to the Tri-Cities but the result was the same as all of the other games this season. The Chiefs lost. Kevin Dudley has the story.

Mariners: Cutting professional athletes bring about the worst days for coaches and managers. Telling a young one his dream is going to be fulfilled is the best. That happened yesterday for Scott Servais and Taylor Trammell. … Kyle Lewis has a bone bruise. He may not be available opening day.

Seahawks: The Hawks made a bunch of signings official in the past couple days. Which one of the new players will have the biggest impact? We won’t guess.

• I have yet to batten down the hatches. Which is a huge mistake on my part. We’re done here but the Gonzaga game is just around the corner. Hopefully I can hide everything before the wind blows through. Last time I lost a bird feeder. The robins have been ticked ever since. One of them was still giving me the side eye yesterday. Until later …

Plenty of Cinderellas are still alive in March Madness, plus grading the latest NFL blockbusters