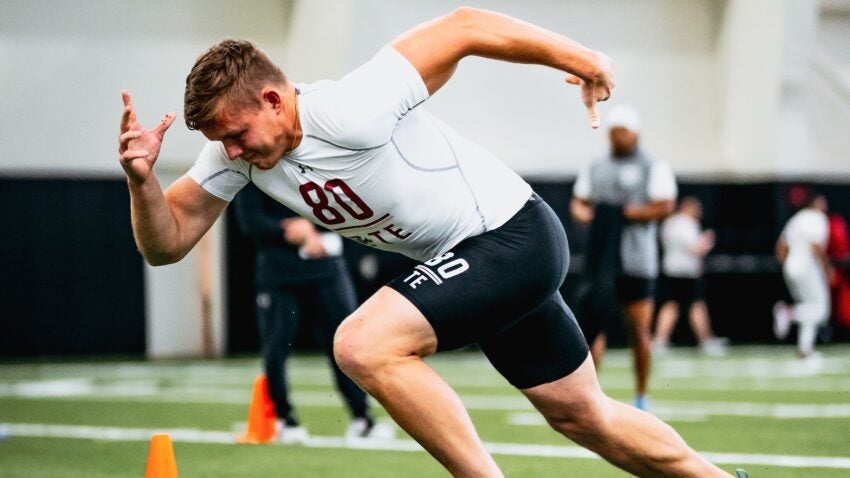 Back when Jeff Hafley coached in the NFL, he relished the process of taking a prospect out to dinner, getting to know him, and setting up private workouts with his own unique spin.

He also combed through data from the NFL Scouting Combine to determine whether a player met the team’s needs.

This year, as the COVID-19 pandemic lingers on, everything is different. With the traditional format of the Combine canceled, and individual access far less readily available, players don’t have quite as many opportunities to get their name out there.

Hafley, who’s now on the other end of it as Boston College’s head coach, knows the ins and outs of the process as well as anyone, and he’s working diligently to make sure NFL coaches have a chance to fully appreciate the Eagles hoping to play at the next level.

That includes fielding phone calls from scouts and giving advice to players who seek it. It also includes Pro Day, which the Eagles held Friday in Chestnut Hill. A total of 35 NFL personnel – including former BC standout and current Miami Dolphins head coach Brian Flores – attended to get a sense of what tight end Hunter Long, linebacker Isaiah McDuffie, and linebacker Max Richardson, among other players, have to offer.

“I think Pro Days are huge this year,” Hafley said.

B Flo is back on The Heights! pic.twitter.com/xsnw9TRWME

Here’s what Hafley and those three former BC stars said about Pro Day and their outlook heading into the NFL Draft that spans from April 29-May 1 and beyond.

They posted some impressive numbers.

Here are the unofficial results, as released by Boston College later in the day Friday.

Bench press: Did not participate

Best of luck today. Grateful to have coached these guys! https://t.co/y5QYuNu713

Hafley said Hunter Long on Friday looked about as good as he’s seen him look – so good, in fact, that it made him wish even more that the Eagles had him back for another season.

Long, a 6-foot-5, 253-pound tight end from Exeter, New Hampshire, is projected by many to go in one of the early or middle rounds. Hafley only coached him for one year, but he was impressed by what he saw as Long racked up 57 catches for 685 yards and five touchdowns and caught the eye of plenty of scouts along the way.

“He’s a brilliant, brilliant kid,” Hafley said. “There’s not many people who will be able to pick up a scheme and a playbook as fast as he will. I think he’s going to be one of the safest picks in the draft, because I think he’ll play for a long, long time. He’ll be a pro. He’ll do everything right.”

Hafley said coaches were intrigued by Long, and he was glad they finally got to see him in person inside Fish Field House. He said the consensus was that they were impressed by his 4.63 and 4.69 times in the 40-yard dash and his overall performance on the day.

“I think he nailed it,” Hafley said. “I can tell how happy he was when he finished up.”

He said he’s always prided himself on his versatility, and he feels comfortable anywhere on the field. Long said he’s discussed the process with former Eagles Tommy Sweeney, Jake Burt, and AJ Dillon, to name a few, and all of their advice has revolved around a common theme.

“Be yourself and be confident. Let loose and show what you can do,” Long said.

He said he’s glad Friday went smoothly, but at the same time, it was just another day in the process. Long knows many more Zoom meetings are in his future, and he said he has a packed slate leading up to the draft.

Isaiah McDuffie has lots of potential.

McDuffie said he’s turned to former BC safety Will Harris for advice during the draft process. They trained at the same facility in Florida, and he leaned on him for words of wisdom.

The 6-foot-1, 227-pound linebacker, who finished fifth in the nation with 107 tackles this season, said he hopes the fact that he thrived in multiple schemes in college catches the eye of NFL coaches.

“The neat thing about him is that he’s only really played one season as a stacked backer,” Hafley said. “His potential, I think, is really, really high. I just think he’s going to keep getting better and better.”

McDuffie said he’s continued to bond with his close friend Richardson during the process as well, noting that they’re “each other’s biggest fans” the whole way.

He said he’ll be back home in Buffalo for the Draft. While it was nice to get Pro Day out of the way, he knows the process is far from finished.

Hafley has interacted with some of the brightest minds in the sport over the years, and he didn’t hesitate to call Richardson “one of the smarter football players” he’s ever been around.

He also referred to the 6-foot, 223-pound linebacker as competitive, tough, and someone who takes everything seriously, and he believes that mindset will translate to the next level.

“I think you’re going to get a guy who’s going to be a real pro,” Hafley said.

Richardson echoed that thought and referred to himself as “the most intelligent player on the field.” He clarified that he wasn’t trying to be arrogant, he just simply believes that to be true.

He’s expected to either go in the later rounds or go undrafted. Of course, he would like to be drafted, but he said that’s not his main focus. He said former Boston College linebacker Matt Milano – who has emerged as a steady NFL player after going in the fifth round in 2017 – has reminded him it’s about the long game.

“It’s not so much about what happens with the Draft,” Richardson said of Milano’s advice. “Don’t allow that to be the biggest of your concerns. Once you get your foot in the door, make the most of your opportunity.”

Richardson said he trimmed five-to-seven pounds off his playing weight, and Hafley noted that he “looked a little quicker” Friday.

“I was told today by all my buddies to run like the wind,” Richardson said. “I was just trying to be a little lighter, maybe catch a breeze.”