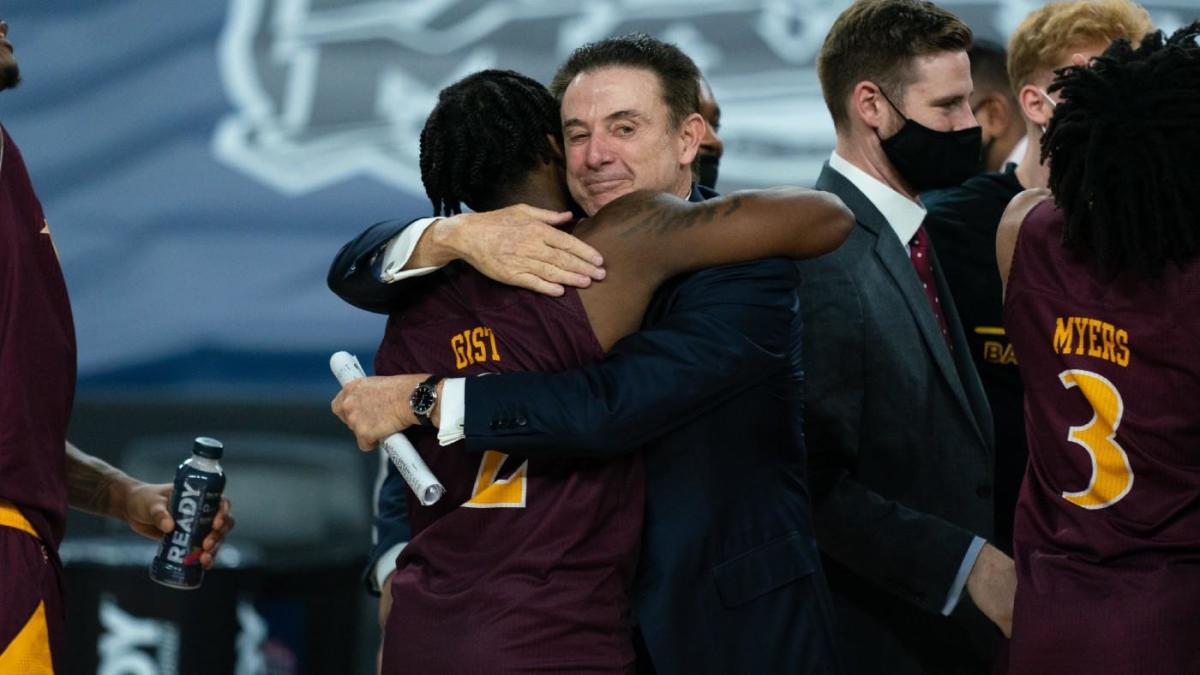 When Rick Pitino was fired at Louisville before the 2017-18 season amid an FBI probe involving basketball program, it seemed  likely he would never coach a team in the NCAA Tournament again. But after his No. 9 seed Iona Gaels knocked off No. 7 seed Fairfield 60-51 in Saturday’s MAAC Tournament final, Pitino is headed back to the Big Dance.

Pitino, 68, will join Lon Kruger and Tubby Smith as one of only three coaches to ever lead five programs to the NCAA Tournament. While Pitino deserves credit for guiding the Gaels this far in his first season at the helm, it’s a program plenty familiar with postseason success. Iona made four straight NCAA Tournament appearances between 2016 and 2019 under former coach Tim Cluess, whose resignation due to health reasons opened the door for Pitino to return to the Division I ranks.

Iona played just 13 regular season games and entered the conference tournament with an 8-5 record. Its spot as the No. 9 seed in the MAAC Tournament was a bit misleading. Instead of seeding its teams based on conference winning percentage like most leagues, the MAAC opted to seed teams by their total number of league victories. That meant Iona was relegated to No. 9 of 11 teams in the bracket and missed out on a first-round bye.

A total of 15 automatic bids to the NCAA Tournament were scheduled to be awarded Saturday amid a wave of conference tournament title games, starting with the America East title game in the morning and going all the way through the Big West title game late in the night.

Start a bracket pool to compete against friends or fill out your bracket for a chance to win a brand new Nissan Rogue and a college basketball dream trip. Get in the action today!

We’re keeping up with the various tournament schedules and automatic qualifiers here as the madness of March begins to heat up.

Hartford is poised for its first-ever NCAA Tournament appearance after winning the America East Tournament. The Hawks were just the No. 4 seed in the tournament but have been great defensively this season and are led by a dynamic playmaker in Austin Williams. The 6-4 junior closed the season hot, scoring more than 20 points per game in the postseason for the Hawks, who enter the NCAA Tournament on a five-game winning streak

Norfolk State is in the Big Dance for the second time in program history and will enter with a six-game winning streak after capturing the MEAC Tournament title. Depth and outside shooting are the strengths for the Spartans, who led their league in 3-point shooting percentage while often using an 11-man rotation. Sophomore guard DeVante Carter keys the operation as the team’s leader in points, assists and rebounds per game.

Iona has been part of the last four NCAA Tournaments, but the Gaels will enjoy a bigger spotlight this time because of first-year coach Rick Pitino. The 68-year-old industry veteran becomes the third coach ever to lead five teams to the Big Dance after directing the Gaels to four straight victories in the MAAC Tournament. His team’s strengths are 3-point shooting and rebounding, and with senior guards Isaiah Ross and Asante Gist leading the way, Iona could be a tough draw in the NCAA Tournament.

Matt Coleman scored a career-high 30 points, Jericho Simms added a career-best 21 and No. 13 Texas was poised at the foul line down the stretch in beating No. 12 Oklahoma State 91-86 on Saturday night to give the Longhorns their first Big 12 Tournament title. Kai Jones and Andrew Jones added 13 points apiece for third-seeded Texas (19-7), which edged No. 20 Texas Tech in the quarterfinals before advancing to the finals when Kansas had to withdraw due to a positive COVID-19 test. The title was the first for the Longhorns in seven frustrating appearances in the Big 12 championship game, and their first conference tournament trophy since winning the old Southwest Conference title in 1995.

Matt Mitchell scored 14 points to lead No. 19 San Diego State to a 68-57 victory over Utah State in the Mountain West Tournament championship game Saturday. The Aggies had beaten San Diego State in each of the last two tournament championship games. The Aztecs, who also won the regular-season championship, had lost six of their previous seven title game appearances. With the league’s automatic bid, the Aztecs return to the NCAA Tournament for the first time since 2018. It marked just the fifth time the No. 1 seed won the title in 22 years.

Texas Southern won 15 of its last 16 games to surge into the NCAA Tournament again after four appearances in five years between 2014 and 2018. This veteran-laden squad is led by junior guard Michael Weathers, an Oklahoma State transfer who has been putting up huge numbers as of late. The Tigers are a terrible 3-point shooting team but are among the best rebounding squads in the nation thanks to a physical lineup that includes productive 6-9 forwards Jordon Karl Nicholas and John Walker.

Patrick Ewing is taking Georgetown back to the NCAA Tournament for the first time since 2015 after the eighth-seeded Hoyas completed a surprising run to a Big East championship Saturday night with a stunning 73-48 rout of No. 17 Creighton. On the 49th anniversary of the day Georgetown hired John Thompson, the late Hall of Fame coach who transformed the program into a national power and one of the most iconic brands in college basketball history, the Hoyas won their record eighth Big East Tournament title and first since 2007.

Ohio enters its first NCAA Tournament since 2012 having won nine of its last 10 games on the way to MAC Tournament title. The Bobcats are an offensive juggernaut whose five starters all average double figures, led by MAC assists leader Jason Preston. The 6-4 junior is also a solid 3-point shooter and great rebounder. The Bobcats took Illinois down to the wire on the road in November and knocked off Horizon League champion Cleveland State 101-46 in December.

After starting 3-6 with competitive losses to a trio of Pac-12 teams, Eastern Washington reeled off 14 victories in its final15 games to secure the Big Sky Tournament title. The Eagles have a breakout star in 6-9 forward Tanner Groves, who was a role player for two seasons before emerging as the team’s leading scorer this year. Groves can do damage in the paint, but Eastern Washington deploys several capable 3-point shooters as well.

Georgia Tech claimed ACC Tournament title on Saturday after knocking off No. 2 seed Florida State 80-75. The outcome sends Georgia Tech into the NCAA Tournament on an eight-game winning streak in what amounts to a stunning resurrection for the program under fifth-year coach Josh Pastner. It’s Georgia Tech’s first ACC title since 1993.

With a deep roster led by center Kolton Kohl, Abilene Christian won 12 of its final 13 games to secure the Southland Conference Tournament title. Kohl is having the best season of his college career, but the Wildcats are often happy to deploy a smaller lineup full of quality 3-point shooters. Their versatility makes them a tough opponent to scout as they return to the Big Dance again following an appearance in 2019.

Grand Canyon is dancing for the first time in program history under first-year coach Bryce Drew. The Antelopes have a lethal front court comprised of 7-foot center Asbjorn Midtgaard and 6-10 forward Alessandro Lever. As such, this squad doesn’t play particularly fast but instead relies on post looks. But don’t sleep on Jovan Blacksher Jr. The 5-11 sophomore guard is a shifty playmaker whose produced some big performances this season.

UC Santa Barbara has won 20 or more games in four straight seasons under Joe Pasternack and finally have an NCAA Tournament appearance to show for it after winning the Big West Tournament. The Gauchos have won 18 of their last 19 games thanks to a balanced attack led by JaQuori McLaughlin. The 6-foot-4 senior guard is an Oregon State transfer who leads the way in scoring and assists.

North Carolina listed as nine-seed in latest CBS Sports bracketology
We use cookies on our website to give you the most relevant experience by remembering your preferences and repeat visits. By clicking “Accept”, you consent to the use of ALL the cookies.
Cookie settingsACCEPT
Manage consent