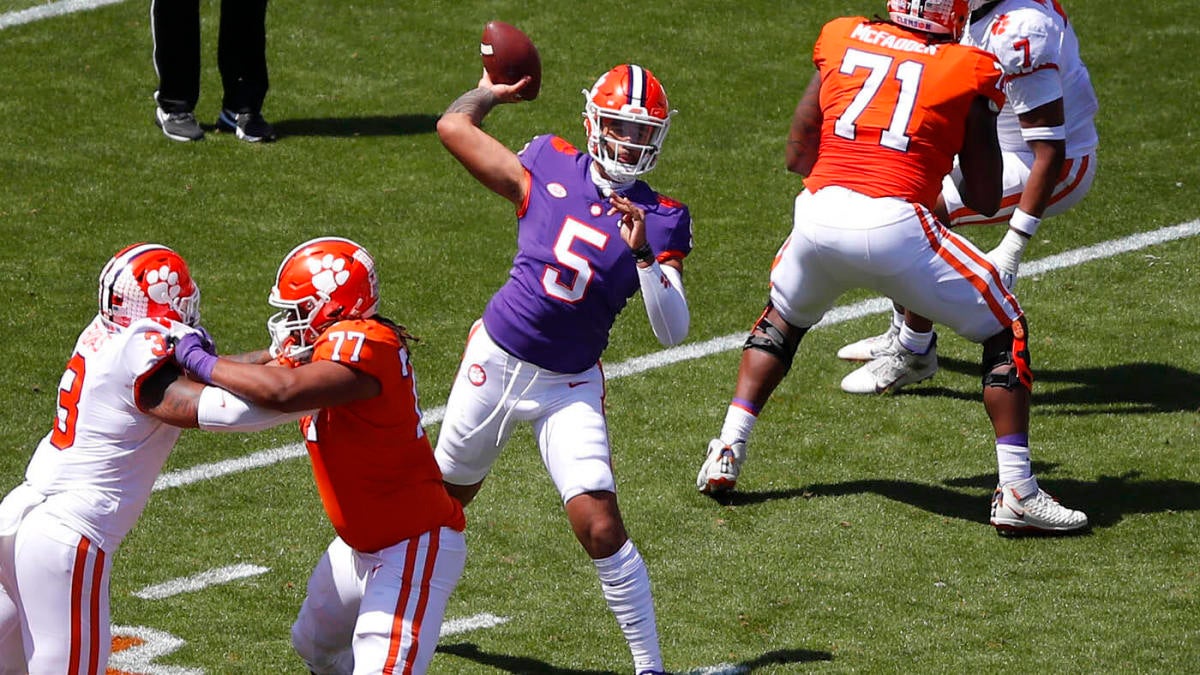 Clemson football concluded its spring practice season for 2021 with an Orange and White scrimmage in front of limited capacity fans on Saturday in Death Valley. Among those in attendance were more than a handful of current NFL players who helped build the Tigers dynasty that we know today, but the person demanding everyone’s attention was on the field getting ready for the upcoming season. We’ve already seen glimpses of what quarterback D.J. Uiagalelei can do in the college game, but now that Trevor Lawrence is off to the NFL Draft, Saturday’s spring game served as the official debut of the new era at Clemson.

Uiagalalei played well in the spring game format, which included non-contact “sacks” for the quarterbacks and a running clock for much of the second half, completing 20-of-28 passes for 174 yards and a score. He got things started early, guiding an eight-play, 73-yard drive on the first possession of the game that finished with a touchdown pass to freshman wide receiver and high school teammate Beaux Collins.

By the way, go ahead and get used to the “high school teammate” connection as the tidbit that will be overused on broadcasts by mid-October. That’s not to belittle their actual connection, it’s only an acknowledgement of Collins’ talent and how coaches and teammates have raved about his performance during this early enrollee spring.

Uiagalelei played for the Orange team, which blew an early lead and lost 14-13, while backup Taisun Phommachanh played for the White team and third-string quarterback Hunter Helms split time between the two squads. The projected starters at the other positions were split fairly evenly, and that format allowed for plenty of looks at the deep running back and wide receiver rooms that are battling to replace the production of Travis Etienne, Amari Rodgers and Cornell Powell.

1. Quarterback depth is going to be a concern

No one wishes injury on Uiagalelei, but Saturday’s spring game brought into focus just how important his availability is going to be for Clemson’s pursuit of a national championship. Phommachanh missed time during spring practice because of COVID protocols and didn’t see any live scrimmage action until just last week. The sophomore played much better in the second half, finishing the game with 163 yards on 14-of-25 passing with one touchdown and an interception. Unfortunately, Phommachanh had to be helped off the field after suffering an apparent leg injury in the fourth quarter. Following the scrimmage, coach Dabo Swinney told reporters that Phommachanh had torn his Achilles.

After him and now in a much more crucial position on the depth chart is Hunter Helms, who played for both teams and totaled just 88 yards on 11-of-16 passing. When Trevor Lawrence had to miss two games last season following a COVID diagnosis, Clemson was fortunate to have Uiagalelei there ready to answer the call. If there are any injuries of significance at the quarterback position during the season, Clemson will be in a tight spot offensively.

2. Joseph Ngata is going to be a problem

We’ve heard about the potential of Clemson’s 6-3 wide receiver becoming a real difference-maker for the Tigers for two years. The departure of Tee Higgins and Justyn Ross’ absence for medical reasons appeared to open that door, but multiple nagging injuries prevented Ngata from ever getting in more than spot play during the 2020 season. Finally healthy, Ngata was one of the spring game’s stars. The junior had 83 yards on six catches and showcased his ability to high-point the football on a deep pass from Uiagalelei in the third quarter.

Sorting out Clemson’s wide receivers, which didn’t even have potential starters Frank Ladson Jr. or Justyn Ross in action, is going to be a great problem for offensive coordinator Tony Elliott to figure out. Sophomore Jaelyn Lay was a good option for short, high-percentage throws from Uiagalelei, freshman Dacari Collins flashed early — “the Collins brothers, one from California and one from Atlanta,” Swinney joked about the pair of early enrollees on the ACC Network broadcast — and then there’s Ajou Ajou. We had already seen his potential in limited action during the 2020 season, but he was a force to be reckoned with on Saturday. No wide receiver had more targets (11), catches (six) or receiving yards (102) than Ajou, who scored on a 16-yard pass from Phommachanh in the fourth quarter.

3. No answers at running back, but depth looks good

Travis Etienne was named the ACC Player of the Year twice, broke all kinds of school and conference records and left a massive production hole that will not be able to be filled by a single player. The good news coming out Saturday, however, is that there are more than a handful of potential contributors that can help fill the needs of the offense. Lyn-J Dixon is the presumed starter after three years of backing up Etienne, but the story from the spring game is how well the underclassmen looked. Redshirt freshman Kobe Pace led all backs with 69 rushing yards on six attempts, including a couple of explosive runs early that helped set up the first touchdown of the game for the Orange team. Clemson’s coaches have been raving about his performance this spring, and he seemed to check that box early before ceding touches to other backs later in the game.

Phil Mafah, a freshman from Georgia, entered the game with plenty of praise from Swinney for his size and physical running ability. He lived up to his coach’s scouting report with 38 yards and a touchdown on six carries to help the White team cut into the lead and make things interesting in the fourth quarter. Throw in the debut from five-star freshman Will Shipley and the veteran presence of Darrien Rencher, and it looks like Clemson can go five-deep with capable options at running back.

In Tennis, Tough Decisions as Players Adjust to Shrunken Paydays