No. 17 West Virginia led 2-10 (0-7) Iowa State by as many as 15 points on Tuesday night but after the Mountaineers got out to that big lead, the Cyclones battled right back and made it a game that would go down to the wire.

In the first meeting between these two teams, it took a 6-0 West Virginia run at the end for the Mountaineers to come out on top. Then last night, it came down to Gabe Osabuohien jarring a loose ball on a collision with six seconds left to give West Virginia the ball at the free-throw line to put the game out of reach.

Finishing off games and putting teams away is something this team in particular has had a lot of trouble with. For some reason, they take their foot off the gas and start doing some uncharacteristic things like taking bad shots, shooting too early in the shot clock, and playing relaxed defensively.

Head coach Bob Huggins was once again not pleased with his team’s effort on Tuesday night and much of it was due to lack of hustle.

“It’s not just defense, it’s everything. You tell them don’t dribble the ball 25 times between your legs, they still do it. I thought one of the big plays that really hurt us is we had a layup. We had a layup, we throw a wraparound pass to a 5’9″ guy who can’t score in traffic, we lose the ball and they come down and make another three. I keep asking them why? Why? Why do you have to dribble between your legs so many times? Hasn’t helped your shooting any. Hard group to figure out.”

With the unprecedented six-game stretch that awaits the Mountaineers, trouble could be on the horizon if this team doesn’t play with maximum effort and energy for 40 minutes on a night to night basis. During the next six games, West Virginia plays No. 23 Kansas, No. 13 Texas Tech, No. 9 Oklahoma, No. 2 Baylor back-to-back, and No. 6 Texas. There won’t be an opportunity for West Virginia to catch their breath or take a few possessions off against these five teams. Coming out of this six-game stretch with a losing record could all of a sudden have the Mountaineers on the bubble for the tournament instead of safely in the field.

The Mountaineers return to action this Saturday to host No. 23 Kansas at 2 p.m. EST on CBS.

Wed Feb 3 , 2021
If former Boston Bruins star Zdeno Chara gets a shipment from China for a clothing company instead of his hockey sticks, there’s an easy explanation. A recent shipment of Chara’s sticks inexplicably ended up in New Jersey, where — according to ESPN — a confused man opened them expecting to find accessories for his […] 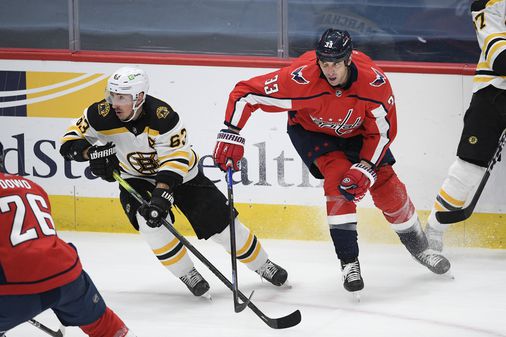